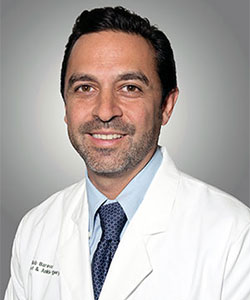 Dr. Baravarian is a member of UCLA Medical Group, chief of podiatric surgery at Santa Monica/UCLA medical center and Orthopedic Hospital, and an assistant clinical professor at the UCLA School of Medicine.  He is also Editor Emeritus of the international medical journal, Foot and Ankle Specialist.

Dr. Baravarian been involved in athletics his entire life and played competitive tennis in high school and college. He has an interest in sports medicine, arthritis therapy, and trauma/reconstructive surgery of the foot and ankle. He serves as a consultant to the ATP (Association of Tennis Professionals) tour, multiple running organizations, and several shoe manufacturers. He is also fluent in five languages (English, French, Spanish, Farsi, and Hebrew). 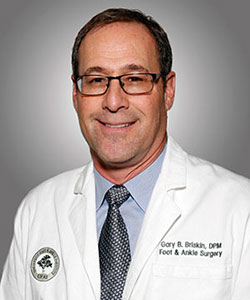 Dr. Gary B.Briskin is co-founder and co-director of The Foot and Ankle Institute, board-certified, and served his residency at Flint General Hospital in Michigan.

He then established a practice in Century City Hospital, where he became chief of podiatric surgery.  Dr. Briskin also serves as an assistant clinical professor at the UCLA School of Medicine and is a Diplomat of the American Board of Podiatric Surgery and a Fellow of the American College of Foot and Ankle Surgeons.

A lifelong sports enthusiast, maintains a special passion for hockey and running. He parlays that same spirit into all aspects of podiatry: sports medicine, arthritis prevention and reconstructive surgery.

And though he does not talk about it much, he still plays ice hockey whenever he can. 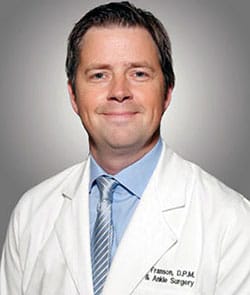 Dr. Justin Franson is a Board-Certified Podiatric Foot and Ankle Specialist and a Diplomate of the American Board of Podiatric Surgery

After studying accounting and physical therapy at Brigham Young University, Dr. Franson decided to pursue podiatry as his career. He then attended the School College of Podiatric Medicine in Chicago followed by a three-year residency program at the Greater Los Angeles VA and UCLA County Hospital.

Dr. Franson specializes in several areas including total ankle replacement and sports medicine. Treating athletes and weekend warriors like himself brings him a lot of joy. “I love being able to provide true relief to the physical problems that people come see me about. I am one of those people who truly enjoy the personal interactions with my patients.”

Podiatrist Dr. Franson is available for patient consultations at our Valencia podiatry clinic. 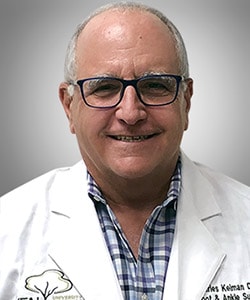 Dr. Charles Kelman is Board Certified by the American Board of Podiatric Surgery, as well as a Fellow of America’s College of Foot and Ankle Surgeons with four decades of experience.

Kelman specializes in a myriad of foot and ankle conditions including bunions, plantar fascitis, Achilles tendon injuries, toe and ankle arthritis, sports medicine, and rheumatology, to name a few.

Kellman made his choice to enter the field of podiatry during his final year of undergraduate study at the University of Michigan, where he earned a Bachelor of Science degree in biology.

When not tending to his patients, Dr. Kelman is an avid deep-sea fisherman and loves to cook his catch while entertaining family and friends. In addition to taking several six-mile hikes each week with hid dogs, Lucky and Cooper, he enjoys a variety of sports, “Being from Michigan and growing up playing ice hockey, my heart is always with the Wolverines, Go Blue!” he said.

Dr. Kelman has volunteered as a Clinical Instructor at the Northridge Family Practice Residency Program since 1989. He also donates his time to the Westminster Free Clinic. 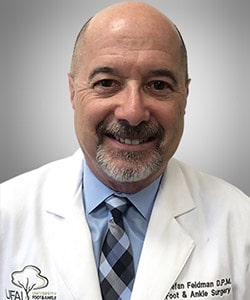 Dr. Stefan Feldman is board certified by the American Board of Podiatric Surgery as well as a Fellow of the American College of Foot and Ankle Surgeons.

He then had “the honor” of did his residency at Kern Hospital for Special Surgery in Warren, Michigan, where he specialized in foot surgery, sports injuries, biomechanics, and general podiatry.

it was also where his father was an attending physician. “I learned a great deal from him and the other skilled foot surgeons at that hospital. Dr. Feldman says. “I still has the ultimate respect for doctors who taught me. I feel that I often stand on the shoulders of giants in my profession.”

Dr. Feldman supports several charitable organizations, including City of Hope, Wounded Warriors, melanoma-related causes, and volunteering at the Westminster Free Clinic. When not helping patients, he’s an active jogger and hiker, an activity where his wife and Golden Retriever often join him. He is also a certified scuba diver and novice golfer.

But come Sunday afternoons, he can be found in front of the TV watching the Detroit Tigers, Lions Red Wings, and Wolverines. “I’m still a Detroit guy… all the way,” he said. 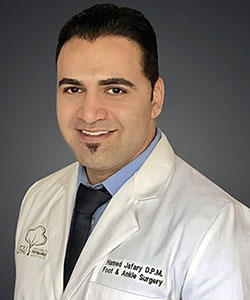 Dr. Jafary enrolled at Barry University School of Podiatric Medicine, in Miami, where he earned his degree in podiatric medicine and surgery. He then spent three years as a surgical resident in the Jackson Health System in Miami, Florida.

Following his residency, Dr. Jafary decided to come back to Los Angeles, his hometown, and complete his fellowship at University Foot and Ankle Institute. “I find podiatry matches my personality since it is a very diverse medical specialty,” says Dr. Jafary. “Being able to do surgery, see patients in the office, and manage hospital patients really keep me active and excited.”

When not tending to patients at University Foot and Ankle Institute, Dr. Jafary utilizes his surgical expertise assisting those less fortunate. As a member of the Yucatan Crippled Children Foundation and Podiatry Overseas, he has performed hundreds of limb correction surgeries on patients in underserved countries.

Dr. Jafary still finds time to enjoy his family life in Sherman Oaks where he lives with his wife. He has a black belt in martial arts, training, and skill that he is very passionate about. Dr. Jafary is a self-proclaimed foody, loves all types of food, and was at one time a chef at a Mediterranean restaurant. 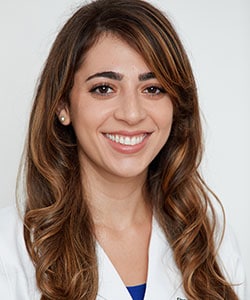 As the newest associate at UFAI, the doctor brings to the staff a lifelong love of sports and a deep passion for helping patients to live active lives.

Her interest in podiatry started while growing up and watching her brother suffer from flat feet. “It was tough seeing him in pain with no real options given.”

“While looking into podiatry it was great to see doctors alleviate patients’ problems so quickly and how grateful they were,” says Gina, who is qualified by the American Board of Foot and Ankle Surgery. “I remember I was able to watch a flatfoot reconstruction surgery and it was amazing that the surgeon essentially created a new foot.”

Dr. Nalbandian did her residency at St. Elizabeth’s Medical Center in Boston, which is affiliated with Tufts University. As a resident, she served an academic coordinator and chief resident.

A resident of Sherman Oaks, Gina continues to volunteer her expertise with the Special Olympics, Happy Feet (providing foot care at homeless shelters), and the Boston Marathon.

Gina is a member of American College of Foot and Ankle Surgeons (ACFAS) and American Podiatric Medical Association (APMA). 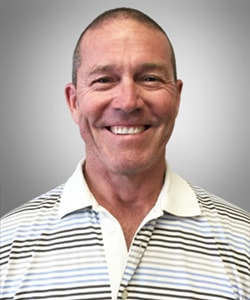 A lifelong sports enthusiast,  Gray enjoys working with athletes of all levels with a special focus on orthopedic and sports rehabilitation. He specializes in foot and ankle pathologies and post-operative recovery. 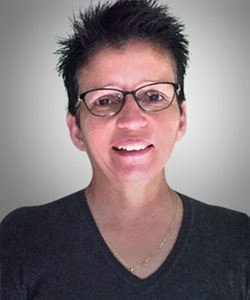 Lydia has over 30 years of clinical experience in outpatient orthopedic and sports medicine physical therapy.

She takes pride in getting to know her client’s personal needs and taking a hands-on approach to restore functional movement, balance, strength, and conditioning.

A longtime volleyball player, Christel turned her interest towards athletic training after sustaining a sport-related injury in high school.

Christel earned her Bachelor of Science degree in Athletic Training from CSU Northridge in 2002 and continued her training at Cerritos College where she received her certification as a Physical Therapy Assistant. 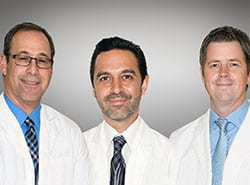